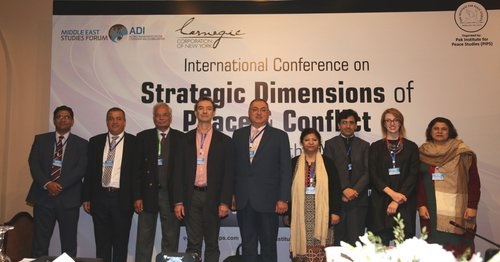 Proxy wars the focus of ADI visit to Pakistan

Experts in Central Asian and Middle Eastern politics, Professor Shahram Akbarzadeh, Dr Zahid Shahab Ahmed, and Dr Dara Conduit, are the leading investigators from Deakin University on a project funded by the Carnegie Corporation of New York to investigate the role of regional actors in fuelling Middle East proxy wars.

The grant from the Carnegie Corporation funds research into the impact of regional actors in the ongoing conflicts in Syria and Afghanistan, which are estimated to have led to the deaths of more than 600,000 people.

As one of the first opportunities to meet with their international partners from Afghanistan and Pakistan since the announcement of the grant last year, Professor Akbarzadeh, Dr Ahmed and Dr Conduit spoke extensively to the Pakistani media about the potential impact and role their research would play in the enduring issue. Read more here